Building beautiful user interfaces and scalable applications requires suitable tools and rock solid foundations. Our team of experts is capable of creating products that meet the most demanding requirements. From wireframing and designs that are carefully prepared with future development in mind, through the meticulous programming process and quality assurance, to most suitable dev-ops environment. We got you covered on all technological fronts.

We've been building every application with Elixir and Phoenix since 2015. As a spiritual successor to Ruby on Rails, it was created with productivity in mind. For a RoR company, such as ours, it was an obvious choice. Thanks to the fact that Elixir and Phoenix is built on top of Erlang Virtual Machine (a technology behind most telecommunication networks), we are able to build lightning fast APIs, error-resistant services and real-time features in a way, that was not possible before. The nature of the framework allowed us to reduce overall development time in projects built with this technology. Additionally, Elixir server distribution and automatic error handling ensures almost non-stop uptime of the system.

Web applications we create meet the highest quality standards through an in-depth Quality Assurance at each step of our development process. Engineers assigned to the project establish code structure and make sure it is followed by each member of the team. Thanks to this approach, the code is easily maintainable and scalable. Apart from the code standards, we use a variety of techniques, like unit, automated, exploratory and manual testing to ensure the product works flawlessly through all stages of its lifecycle.

Secured web application is a critical success factor of any online product. Our automated pipelines allow us to continuously verify the software we use and remain prepared for security issues that may arise over time. We use containers to ensure an isolated environment for custom software we create. Continuous Integration pipelines check for outdated libraries and well-known issues giving developers the opportunity to fix them immediately. Peer code review and penetration tests help us keep the highest standards of security. 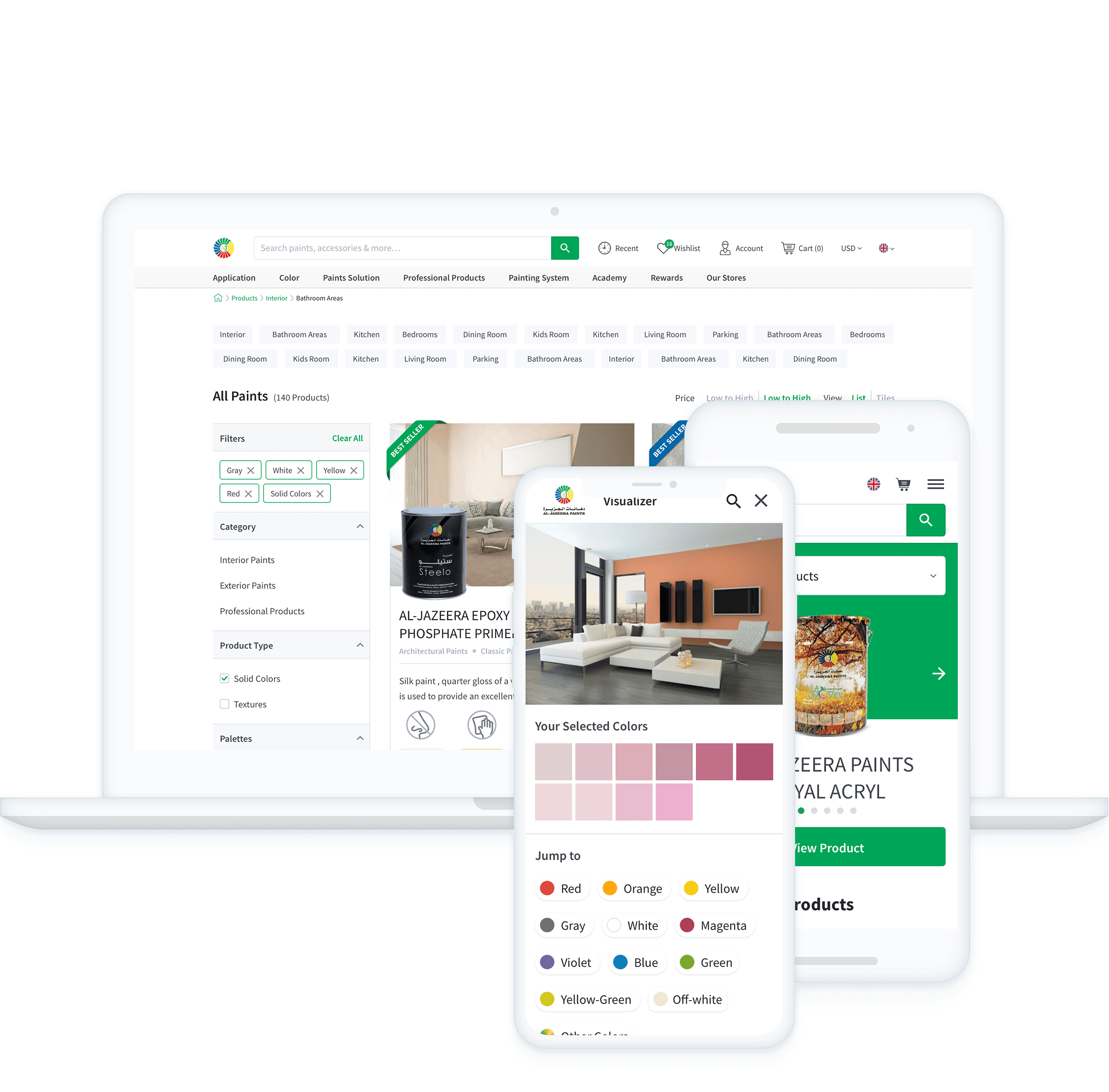 Al-Jazeera Paints is a leading manufacturer of paint in the MENA region. The company decided to redo its website to be a fully interactive online store. Users can browse through the available products, quickly search with various filters, get info about specifications and display paints on predefined scenes withVisualizer. As the last - e-commerce part of the application would let customers easily order, pay and pick up previously selected products.
View Case Study
This website stores cookies on your computer. The data is used to collect information about how you interact with our website and allow us to remember you. We use this information to improve and customize your browsing experience and for analytics and metrics about our visitors both on this website and other media. Cookie Policy Privacy Notice

Make the first step for a great partnership! Share your idea with us and check what we can do for you and your company.
Say Hi!
ServicesWeb DevelopmentMobile Development
PortfolioZumbaHelium HealthAl-Jazeera PaintsFlyin
TeamBlogJobsInvestor Relations
AppUnite Sp. z o.o.
VAT ID: PL 7831689686
Droga Dębińska 3A/3
61-555 Poznań, Poland
+48 532 568 641
office@appunite.com