There’s no doubt that the world revolves around digital experience. On-demand applications have become an integral part of our lives. As the pandemic progressed worldwide, almost all areas of industry became more digitized. Last year digital applications grossed over $581 billion dollars. We all can see the potential here, but how to use it to our advantage? Let’s discuss how Flutter development can help.

Why choose a cross-platform framework?

The growing popularity of mobile applications has led to the rise of two major concerns of startups: How to develop an app that can compete with others with the 3,5 million apps in Google Play and 2,2 million in Apple Store? How to make my product stand out, especially with a limited budget, with 407 million innovative companies operating around the world? With such rapid growth of mobile apps and cutting-throat competition, it’s become obvious for all-level enterprises that choosing a solution which ensures the best cost and time efficiency is simply a must. That’s why cross-platform solutions for mobile app development are a choice to consider.

What are the benefits of cross-platform development?

Companies tend to choose it for many reasons, with reduced development costs and time, ability to effectively reach the target audience and reusable code among others. There are many languages and frameworks that make it possible, one of them being Flutter which is worth considering for cross-platform app building.

Having chosen Flutter development for our project specialization, in this article we will list top reasons why we believe this is the best cross-platform to consider.

What is Flutter development?

Flutter is Google's framework launched in 2018 and designed for cross-platform development based on the DART programming language (originally called Dash), also created by Google. It allows developing an application only once for two platforms: iOS and Android. It also allows building web apps and offers alpha mode for Windows and Linux. Flutter is becoming more and more popular thanks to many instructions available online such as how to create a smooth flutter tutorials, from one of our Flutter developers. 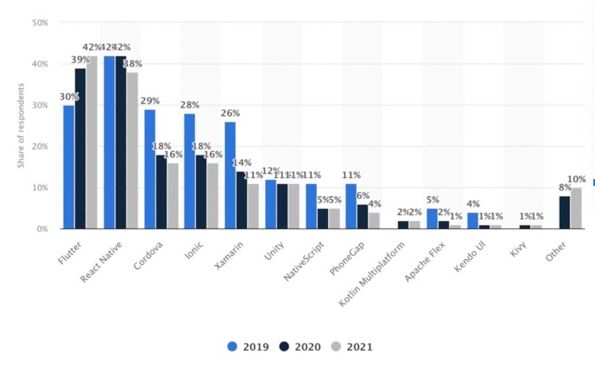 There are a lot of successful apps created with Flutter that are available on the market and some of the best renowned are:

When advising our clients, we emphasize that one of Flutter's best features is that it’s intuitive, easy to manage and allows much quicker development time than using different tools. In the next section, we are diving deeper into that.

First, let’s focus on why Flutter development is appreciated by those who are in charge of business results. The major benefits are:

Flutter is a good solution if you want to reduce development costs of your mobile application. Instead of doing two native developments in parallel, it’s enough to code only once. This is how Flutter development helps save plenty of time and money as well.

Created by Google, Flutter offers access to wide documentation, a good toolkit and an ever-growing community. It provides increased responsiveness of technical support in case of problems and an opportunity to exchange valuable experience with other developers. It means that your product is more reliable and your team can react faster to any risk situations.

As mentioned, Flutter cross-platform development allows the creation of an application on iOS and Android by sharing the same code base. Building two independent applications would require much more time and resources, which could result in late product release. Flutter's widget-based UI and quick reload for debugging allows you to launch a project or build a new feature more quickly, which mitigates the risk of delays and failures at an early stage.

Obviously, the above-mentioned benefits of Flutter development come with direct advantages from a developer’s perspective. The most critical ones are:

I've begun my adventure in commercial programming as a Flutter Developer. Thanks to the ease of writing code in Dart and developing apps in Flutter in general, I have quickly started to deliver large and complicated features myself. I can't imagine an easier way of creating valuable products in such a short time.

One code, many platforms

Flutter offers common code that works both on iOS and Android. This means that the same code will work on both OS, so workload is significantly reduced. Moreover, it’s also possible to code for Windows and Linux in alpha version.

Flutter allows the page or the app to be reloaded automatically without any additional action required. This way any changes made can be validated very quickly and on both platforms. This hot reload of code is highly appreciated by developers, as it simplifies debugging.

Most developers claim that it’s easy to learn coding with Flutter because most actions can be completed via UI widgets. To make app development even easier, developers can also use provided blocks and mentioned widgets. This way the advanced knowledge of Dart programming language is not necessary, however, the knowledge of basics will still be a must in the beginning.

Last but not least, Flutter web development can be done within Android Studio which is an intuitive and convenient tool for Android developers and very popular Visual Studio Code which makes it simpler to use. Flutter comes also with a suite of performance and debugging tools that help e.g. see the widget branches and performance metrics which makes the coding process much more proficient.

Working with Flutter is easy and intuitive, especially building the UI layer. With Flutter we can easily expand our applications to other platforms with almost the same code base. Our android and iOS developers easily adapted to the new language and the effects of their work were visible very quickly.

So, why choose Flutter? Summary

Having delivered dozens of projects developed with Flutter, we know how to use its strong suits and turn your project into a competitive product. If you need advice on Flutter development, or are currently looking for someone to start your project with, feel free to contact us or send us a brief right away. We’ll be happy to provide you with more information, and help you to kick off your project.

6 years in the mobile development. Always willing to help others.